May 10, 2018
Video is one of the most commonly used file types on mobile phone. People capture life videos with camera, watch movies with video player, exchange short videos in WhatsApp or other social media apps. It is inevitable to delete some important video files by accident. While Android mobile phones don't have Recycle bin or Trash can, you may need an excellent video recovery app for Android.

The best video recovery app for Android is iReparo for Android. It can recover videos, photos, contacts, WhatsApp and 5 more kinds of data from Android phone and tablet. This program supports all major brand devices running on Android 2.1 to 8.0, including latest models of Samsung, HTC, LG, Sony, Motorola, Huawei, Nexus, OnePlus, etc.
Note: Root is required for Android video recovery from internal memory.


Why is iReparo for Android the Best Video Recovery App?

1. Recover Videos from Phone Memory and SD Card
By default, Android phone stores videos in internal storage, but SD card is also an option for many models, like Samsung Galaxy. iReparo for Android is able to scan both mobile phone space and inserted SD card's storage.

2. Recover Gallery Videos as well as App Videos
Most videos in mobile phone are shot with camera, but there also other kinds of video files, like video call recording, which are saved in folders created by the recording apps. iReparo for Android can recover all videos from your Android mobile phone. You can either choose to filter videos according to formats, like mp4, avi, mkv, etc., in Multimedia section for quick and precise recovery or select All in order to restore files as many as possible.

3. Support Multiple Video Formats
As said above, there are various kinds of video files in Android handset, so are video formats. iReparo for Android supports all common video formats in Android, so users can retrieve all types of videos with this tool.

4. Provide Playback Preview before Recovery
Worrying you would recover files you don't need? iReparo for Android allows users to playback videos within the program in preview section. You can surely only restore the video files you need. 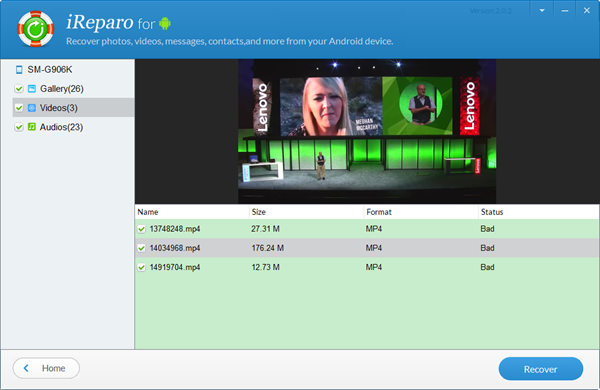 Popular posts from this blog

May 04, 2018
It has happened hundreds of times on hundreds of Samsung users that people forgot the password (PIN/pattern) to turn on Private mode, and thus unable to access the precious data and files in it. Some people may even come into the boat due to failed fingerprint recognition. According to Samsung, the only method to reset Private mode password is factory reset, which will wipe all files within it. Is there any way to fix the problem and make Private mode work again?
Extract Files from Private Mode Files added to Private mode are in your phone memory (Samsung Private mode folder location), but invisible when Private mode is turned off. You can use some tools to extract files from your phone. For example, use iReparo Android Recovery to scan your phone for hidden files, preview the files you need and recover them from your phone.
Related: How to Fix Private Mode Not Working
Unlock Forgotten Private Mode Password A developer from XDA forum figured out a solution to unlock forgotten Private …
8 comments
Read more

Recycle bin is always useful since it is nearly impossible to avoid data losing when you have a Samsung phone or other mobile devices. As for Samsung S8, if you have set up a Google account or Samsung account on your phone, the cloud Recycle bin on Gallery should have been turned on.
How to Restore Deleted Photos from Galaxy Recycle BinStep 1: OpenGallery app. Step 2: On the upper right corner of the screen, tap More. Step 3: Tap Settings. Step 4: Tap Recycle bin. Note: Some devices may have these following options: Gallery→ Drawer icon (≡)→ Settings→ Cloud sync→Auto sync "ON".
Recover Deleted Photos from Samsung Galaxy S8 without Recycle Bin Recycle bin is very helpful. However, in many cases, we have to try everything possible to undelete photos from Samsung Galaxy S8 without recycle bin. Best Samsung Data Recovery Software iReparo Android Data Recovery…
10 comments
Read more

March 28, 2018
Facebook for Android allows users to view shared links with its web viewer by default, but this is not always the right choice that people really want. Many Facebook users want to open Facebook links with YouTube app instead of the browser or web viewer inside Facebook. In this tutorial, we are going to show you how to open YouTube links on Facebook app with YouTube. The same goal for Facebook Messenger will also be archived in case you are interested.
Enable Open Links Externally on Facebook App Step 1. Open Facebook for Android.
Step 2. Tap the three-line Menu on the right.
Step 3. Scroll down to find and enter App Settings.
Step 4. Toggle to enable Links open externally.
Now when you tap to open a link of YouTube video from others' post, your phone should pop up several options to open the link with, such as YouTube, Chrome, or other browsers. Just choose YouTube to open the link.
Note: This setting also works if you want to open other types of links on Facebook with Chrome or …
15 comments
Read more